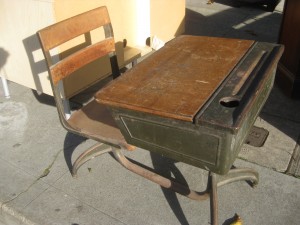 Well, it’s late August and the school buses are rolling already. When I was growing up in Defiance, Ohio, school started right after Labor Day. But never mind the history lesson. We’re here, with the start of another school year and my thoughts, as always, turn to Mrs. Zesky, my fifth grade teacher in Slocum Elementary.

I can’t imagine what her reaction would be to these schemes to improve schools that politicians and school reformers have dreamed up. But I can testify that the matronly Mrs. Zesky was one of my best teachers. Public school, folks. Counting three college degrees, I studied with lots of fine teachers, Mr. Zimmerman in eighth grade English, Miss Mouser in 11th grade English, T.G. Burks in philosophy, Dr. Willer in American literature. Mr. Feldhaus in Shakespeare. Nobody beat my fifth grade teacher.

Here’s one thing about Mrs. Zesky’s teaching. She gave every student a chance to answer a question. And to ask a question. Every child was treated with respect. No teacher’s pets. She wasn’t pressing her students to meet arbitrary standards established at the Ohio Department of Education. If we had achievement tests, we didn’t cram for them.

We learned American history, watched films about the Founding Fathers and the Civil War.
We learned our math facts. You knew you weren’t going to get out of her class and go on to sixth grade if you hadn’t mastered your math facts.

Bertha Zesky oversaw all this learning in a kindly, friendly manner. She didn’t scold or reprimand or embarrass a student. None whatsoever that I recall. She gave us a break on a regular basis from the nose-to-the-grindstone studying.

I don’t recall the reason that she led us to the empty classroom next door for story time. Anyway, she then read to us about the adventures of animals in the forest. Sammy Squirrel? Reddy Fox? That was 66 years ago so I probably have the characters wrong. What I do remember is that Mrs. Zesky made the characters come alive. It was such a terrific exhibition of the pleasures of reading.

I don’t recall her ever sending a student to the office of the principal. That would have been “Old Lady Lind” we called her. She was also my first grade teacher. Her stern demeanor suggested she probably deserved her nickname. Yet we all did learn to read. In fifth grade, there was more.

I don’t think Mrs. Zesky even made a student sit in the hall just to have some classroom peace. I guess we all behaved because she was so nice to us.

My favorite story came during the Christmas gift exchange. We all drew names of course. Limits were set on spending. To my horror, I drew the name of a girl whose family didn’t see that she came to school with clean hair and dress. To my regret, I suppose I and my classmates shunned her. Getting that name in the gift exchange was a humiliation I didn’t need at age 10. I don’t recall that I was crying. But Mrs. Zesky did call me to her desk to discover my distress.

No problem. Mrs. Zesky needed a name and she would give me her name. The teacher’s name! I had the honor of giving our teacher the Christmas gift. The girl whose name I drew would get a gift from the teacher. How special did that make her feel!

Several lifetimes later, when I was writing editorials for the Fort Wayne Journal Gazette, I also served on the board of the Education Writers Association. With that group, mostly education reporters, I visited a dozen schools and districts around the country. We heard from experts, political leaders and top school officials in a number of states, plus U.S. secretaries of education.

I suppose I picked up good ideas for editorials from these speakers and school visits. But as I reflect on the lectures and interviews, I can’t think of a thing that would have improved Mrs. Zesky’s teaching. Not a thing. She did it all without having a state senator looking over her shoulder or endless drills in math or science. Thanks, my dear Mrs. Zesky.