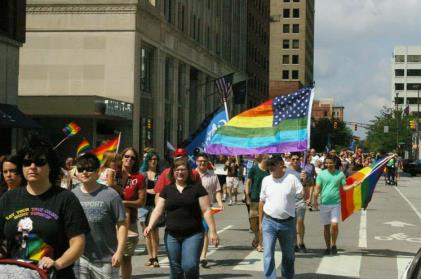 To be sure, the battle for full rights for gays and lesbians is not over yet. About half the states still don’t recognize the right of gays to marry. But the celebratory mood of Saturday’s Gay Pride parade and festival downtown told the story: In a real sense, it’s all over but the shouting.

Even as I was composing these words, national news broke that a federal appeals court just struck down Virginia’s ban on gay marriage. Indiana’s court decision striking down our ban is on hold, pending appeal.

Saturday, I had to get my jog in early so I could join my wife Toni for the parade that started and ended at Fort Wayne’s Headwaters Park downtown. I understand this was the biggest crowd of the 18 the city has witnessed. Sunday’s news story had no firm numbers but estimated that the marchers numbered in the hundreds.

At the gathering place on the edge of the park, we quickly found good friends from our Unitarian Church. Several members and their children wore bright amber “Standing on the Side of Love” T-shirts. Some carried rainbow flags and the church’s huge banner. Other friends we met included the United Church of Christ minister and the husband and wife co-ministers from First Presbyterian.

Wes, one of our granddaughters’ good friends, greeted us warmly. As an event organizer, Wes carried a bull horn and wore an ear-to-ear grin. He had been at our home numerous times and seemed as thrilled as we were at the turnout.

The parade marched us through the downtown, past the historic Allen County courthouse and, a few blocks west, past the main library that houses one of the country’s biggest genealogical collection. Not many steps farther and we were in the old West Central neighborhood. Cars honked as they passed and gave us a thumbs up to our pro-gay marriage signs.

As we crossed busy downtown streets, police officers directing traffic smiled and made sure even the stragglers got their chance to cross the street safely. The festival had become a community event. Gay Pride surely is becoming community pride.

Back in the Headwaters Park pavilion, dozens of tables had been set up displaying brochures for all manner of issues and a few businesses, from insurance to real estate. Our Unitarian minister, the Rev. Misty-Dawn Shelly sat with a couple of members to distribute brochures that tell a little of the church’s history and beliefs. Our daughter Robyn would join them later in the day.

A few trailers offered snacks and beverages. You could even buy a brat and a beer if you didn’t have other lunch plans. Some things never seem to change.

But respect for rights of gays and lesbians surely is one of those changes, a milestone in the history of civil rights in this country. Walls have been coming down so much of my adult life, from the Brown desegregation decision in 1954, to the Defense of Marriage Act in 2013.

I’ve been retired now from The Journal Gazette nearly 14 years. I often championed the cause of gay and lesbian rights in editorials and columns. But in all the time I worked at the paper, a quarter century, I don’t recall that gay marriage even came up for discussion in editorial board meetings. Now it’s front page news. The cause has moved so fast!

Some people will always believe homosexuality is a sin. I’m thinking of the young man whose sign showed he wasn’t joining our celebration but rather warning of eternal damnation. Toni and I tried to engage him in a conversation. He would have none of it. I guess you don’t seek the truth when you think you’ve found it. But our fellow marchers treated him with respect.

The great thing about America is that eventually we make room for every view, every opinion, every person. Now the time has come to make room for gays and lesbians. And for them to marry and enjoy all the rights that go with it. I’m thrilled I’ve lived long enough to celebrate that day.