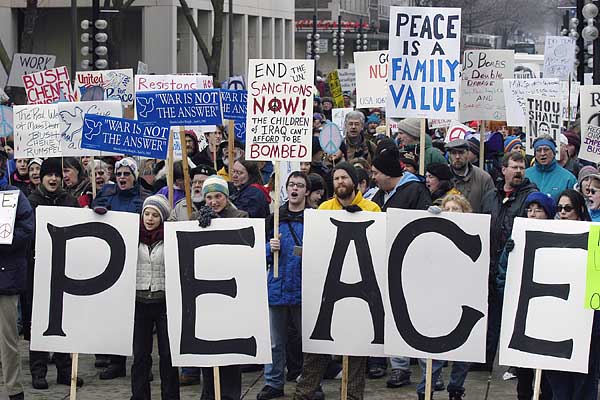 So what if only a few peaceniks showed up at Fort Wayne’s Courthouse Green on Veterans Day. They held up signs with anti-war slogans as traffic whizzed by on South Clinton. Mostly, the signs called for the end of U.S, involvement in Mideast wars. I knew one couple there from the Peace and Justice Commission I belong to. Another person there I’ve known for years because he’s written a lot of letters to the editor. All thoughtful, caring people.

When my wife Toni and I lived in D.C. in 1992, I showed up at some huge peace demonstrations and marches down Pennsylvania Avenue. Mostly, I was there to write about the event for the Fort Wayne paper. But my sympathies were with the demonstrators.

I imagine most of my peace advocate friends hope their cause will prevail and the United States will withdraw from whatever war our country happens to be fighting at the moment. I’ve never been optimistic that the demonstrations and letters to members of Congress would end a war.

I’m reminded that the Vietnam War ended with the North Vietnamese Communists routing the South Vietnamese and American troops. Our last remaining folk had to be rescued by helicopters lowering ladders to the rooftop of the U.S. Embassy in Saigon. The anti-war movement itself hadn’t changed a thing.

A peace demonstration on Veterans Day may seem odd timing. After all, if you go back to the holiday’s origins, you’ll see that it wasn’t intended to glorify war. President Eisenhower signed the bill in 1954 only to honor veteran of all wars Americans had fought in. Veterans groups had lobbied for it.

At first that day of recognition was held in October. But lots of people complained, thought it was confusing. So President Ford signed the bill moving Veterans Day to November, supplanting Armistice Day. Of course, that switch didn’t make champions of Armistice Day happy. Every November 11 you’ll hear of a peace group or two calling on Congress to restore the original name and meaning of the holiday.

I imagine that’s another lost cause. Still, surely Americans who celebrate Veterans Day don’t mean to neglect honoring their great grandfathers and great uncles who fought and died in the First World War. To be sure, in Europe, it’s observed with grand parades. November 11 finds London festooned with poppies.

I doubt that my great Uncle Fred, an American officer during the Great War, would have minded casting a broad net to honor all veterans on November 11. I inherited his letters back home to Van Wert, Ohio, to my great Aunt Dora. Showing careful penmanship, his letters are quite touching, newsy and humble. This wasn’t a man worried about national recognition. He just wanted to get home in one piece.

Meantime, I’m glad to see the peace advocates still speaking up and speaking out, even when few people show up to wave a sign. No peacenik I ever knew hates Americans in uniform. That’s not the issue. The issue for peace advocates has always been the judgment of political leaders who lead the country into ill-conceived wars.

Even if they don’t keep our country out of wars, I’ve always reminded peace advocates that they must keep raising their voices. Those voices help protect Americans’ time-honored right to dissent. Americans can be terrific dissenters. Sooner or later, our political leaders will listen.