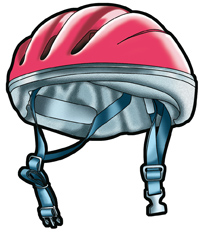 What does it take for otherwise sensible people to wear a helmet when they take a ride on their bike?

Every day, when I’m jogging in Foster Park, some bicyclist whizzes by me, might even shout, “Good morning!” Yet so often the person is missing something. Something important.

The person is friendly. Smart enough to know they need to exercise to stay healthy. They apparently have enough income to buy a bicycle. Yet at least half aren’t wearing a helmet. Which costs a fraction of a bicycle.

I’m not expecting every bike rider to go on Google to research the statistics on the chances of a bicyclist without a helmet ending up with major league hurt or killed if he or she gets into an accident.

I don’t expect people to just know that every year over 800 people are killed riding a bicycle. I don’t expect them to know that over half of those fatalities involve major head injuries. And you don’t need to be a researcher to guess that if the bicyclist had been wearing a helmet, he or she might well be alive today.

A former editor of mine was riding his bike early one the morning. As he entered the park, he failed to notice a speed bump in dawn’s early light. He flew over the handlebars head first. Thank goodness, he was wearing his bike helmet. I’m sure he was really shaken up. But perhaps he was most shaken up when he saw the big crack in his helmet. Without the helmet, he surely would have had a concussion if the fall hadn’t killed him.

Emergency room doctors see more bike injuries in kids than injuries from any sport. The most serious are head injuries, thousands every year nationwide. Apparently, the number increases every year.

In 2009, 90 percent of the bicyclists killed weren’t wearing a helmet. A large number of those fatalities were of middle-age men. Those were people who cared enough about their health to exercise yet failed to protect their most-precious possession, their own noggin.

When I see a kid on a bike without his helmet, I don’t assume he doesn’t own one. It’s quite possible he chucked it after he was out of his parents’ sight. I understand how kids might not do something for their own safety.

When I was a kid in the 1940s and 1950s, you never heard of anybody wearing a bike helmet. I took lots of spills on my bike that might easily caused serious injury. Once, riding on the back of a friend’s motorbike, a car suddenly backed out of its parking space. The motorbike, my friend John and I slid halfway under the car.

A woman nearby came running to us sobbing, just sure we had been badly hurt if not killed. Aside from scratches on our legs and arms we were OK. We were just very lucky that was it.

Years later, Kenny, a boy in our quiet neighborhood, rode into the path of a car and was killed. Such a shock for neighbors. Such a tragedy for his family. I had no adequate words for them at the funeral home.

Jogging in the park the other day, I got to the place in the rode where a dad, a mom and three or four of their kids emerged on their bikes from the riverbank. They all greeted me. Even the younger kids. All very friend. I stopped running to let them pass. I wished them a good morning. Then I realized. No bike helmets. Not a one. They went by me so quickly I didn’t have a chance to tell them where they could buy helmets.

Our city doesn’t have an ordinance that requires young cyclists to wear a helmet. Nor is Indiana one of the 20 states with a law. There’s no excuse for such official oversights.

Think about this. We’re all required to wear a seat belt in a car or truck. Modern cars protect you from major head injuries with an air bag. Yes, early on some people complained about the seat belts. And I recall the auto industry howled about being required to add the air bag expense. Somehow, we’ve learned to accept these protections without complaint. And so many lives saved!

Let me put it this way. Aren’t kids just as precious on a bicycle as they are in a car? Isn’t everyone? What’s the problem with the helmet?