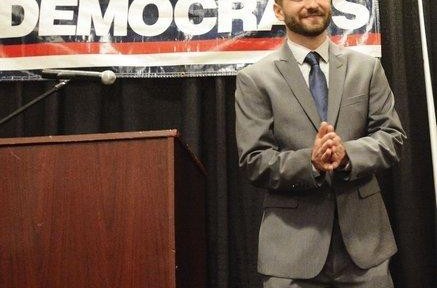 Election Day our precinct was voting at our Unitarian church. Every day I walk or jog through the church parking lot. Tuesday, I stopped to get in line to vote. My wife Toni met me in the lobby to check me in. She usually works at the polls. But this day she had only to drive across our subdivision at some ungodly hour of the morning to get her assignment. Daughter Robyn was working at another polling site. It seems our family just enjoys getting involved in the nation’s affairs.

No matter what outcome I expect, I never hesitate to head for the polls. All my adult life I’ve never understood why some many Americans don’t bother. When we lived one year in Washington D.C., we voted absentee ballots. This day I struck up a conversation with a young black woman in front of me in line. I had just started telling her about interviewing hundreds of candidates when I was writing editorials for the morning newspaper in Fort Wayne, The Journal Gazette. Then, she was summoned to vote as one of the three voting machines had become open.

I looked around at the gathering of voters. I couldn’t help wondering how many bothered to read the newspaper’s election editorials. How else could they get an impartial, informed take on the candidates? Surely, few people take the paid TV and radio political commercials as fair or even truthful. Apparently, candidates and their advisers believe the ads work. They sure spend lots of money on them.

I stepped behind the voting machine. In that instant, I realized I had skipped reading some of the endorsement editorials in my old paper. I didn’t remember to carry the list of endorsements along to our voting precinct.

I turned page after page on the machine. Of course, I saw lots of names I recognized. I quickly marked my ballot for a few of them, including a judge up for retention. We graduated from high school together and he did some legal work for me. But I saw names for state offices that I didn’t recognize. What a handicap so many voters confront, not only those who never interviewed candidates but also those who never researched the office or the candidates’ qualifications.

As a long-time news junkie, going back to my school days, I had been reading the stories and the opinion columns so the election night results didn’t surprise me. For weeks, opinion polls had been finding that voters nationwide were telling pollsters how turned off they were to politics, indeed how angry they were at Congress and the president.

Still, the Democrats took an almost historic drubbing. Republicans picked up more than a dozen seats in the U.S. House. Even more important, they won enough Senate seats to give them the majority in that body, making one of my least favorite politicians, Mitch McConnell, the Senate Majority Leader. I will say that the day after the election, I saw photographs of the man smiling. That’s new to me.

The pundits put a lot of the blame for the Democrats’ losses on President Obama.
After listening and watching him for six years, I understand some people would be weary of the man. I got tired of George W. Bush long before that. But that’s hardly sufficient reason for turning the U.S. Senate over to the opposing party. There’s more to it than dislike of President Obama.

Start with the gridlock in Congress. No progress on climate change. Scientists say that imperils our very planet. No progress on immigration reform. Nothing on entitlements. Or the tax code. Or a reduction in the income gap between the middle-class and the rich. Who to blame for the failure to act on such issues? Much of the blame belongs to the Republican majority in the House.

In fact, national Republicans ran a nearly agenda-free campaign. Election night Sen. McConnell said he didn’t want to give away the game plan before the first play of the game. But then why put the Republicans in charge of both houses? Go figure.

I confess that I’ve liked President Obama since he was a junior senator from Illinois. He was our luncheon speaker one day at an editorial writers’ conference in Chicago. I’ve voted twice for him. I think he’s brought dignity back to the office of the president. For my money, he’s a fine speaker. He’s been a decent president.

Naturally, I haven’t always agreed with his decisions. I haven’t supported drone wars in the Mideast and Africa. I think the spying on citizens has encroached on our civil liberties. It has not kept our country safer. But in the meantime, Obama has been a strong supporter of causes I believe in, a higher minimum wage, cuts in the overblown defense budget and judicial appointees who are not ideologues.

Fortunately, the Republicans didn’t win enough Senate seats to give them the votes to prevent Democratic filibusters. The Republicans are far short of the 67 votes to override a presidential veto. There they are, folks, checks and balances. Thank our Founding Fathers for that.

On a personal note, I was very sorry that our young friend Thad Gerardot lost to the Republican incumbent in one of the more closely watched Indiana House races. Toni had worked hard and made lots of calls on Thad’s behalf. I found him extremely qualified and fair-minded, quite knowledgeable about state and local issues and a darn good listener, a rarity among politicians.

I hope we’ll hear more from Thad. I sure hope so. Even when a terrific candidate loses, that person has performed a vital public service, giving a voice to his or her supporters and assuring that our democracy will remain vibrant and durable for many years to come.