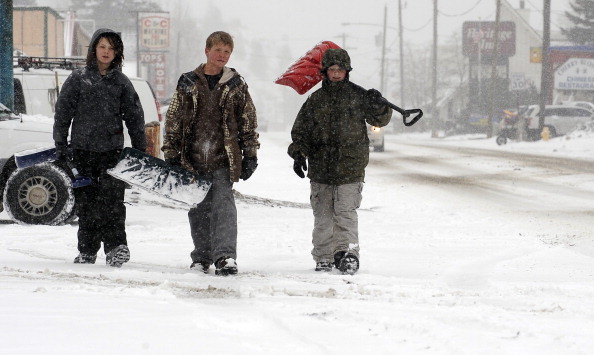 It looked like they’d done a good job shoveling the walks and driveway.

I never haggle with kids about the price. When I was growing up in Defiance, Ohio, I didn’t tell people what I charged. I just thanked them for what they gave me.

I guess even then anybody could see I never was going to be a businessman.

Today, I’d prefer to stay home. But I’ve got an appointment with the physical therapist and I need to go to the store. Thanks to my young workers, I’m confident I’ll be able to get out of the driveway.

I really don’t mind the snow. Today, our backyard hill has taken on an eerie aspect, not quite a moonscape but other worldly nonetheless. Nothing quite compares with the quiet beauty of fresh snow.

As I gaze out the sliding glass doors for a minute, I’m easily transported to another place, another time. I’m magically back in Defiance, dragging my Red Ryder sled two blocks past the Episcopal church to the riverbank.

I might stop at Davy’s half a block from my house to see if he’s up for sledding. Later, I might enlist neighborhood kids to build a snowman or erect a fort. Of course, snowball fights would follow.

I don’t recall getting a day off school for snow days. I think all of us in the neighborhood walked either to Slocum elementary or the Catholic school. Farm kids of course rode a bus to school.

The mailman is running a bit late today. I just saw him across the street. I imagine last night’s snowfall slowed down delivery in the city. A granddaughter was supposed to start a new job in a nearby town. She has a bit of a drive. I didn’t hear whether she was able to make it to work on time.

Tonight, President Obama will give his last State of the Union address. The event is another happening in January. No snow in Washington, of course. But surely overcoat weather there.

I’ll tune in for the speech. I’ve always liked Obama and will miss him. I met him at a luncheon for editorial writers in Chicago when he was still a U.S senator and also a candidate for president.

This year Americans will have another chance to break down an older barrier. We might well elect a woman as president. I spent a bit of time with Bill Clinton when he was still governor of Arkansas but never met Hillary.

So here it is, January, a time in this part of the country for snow and an important speech on television. I suppose the boys who shoveled our walks and driveway will skip the speech and hope they’ll get another day off school.

Yet the State of the Union speech could end up being a lot more important to their young lives than the five dollar tip I gave this morning. But I give them credit for making the most of a snow day. Maybe I should have tipped them more.