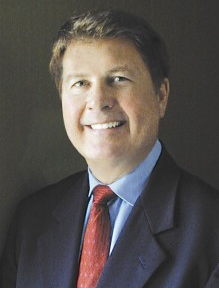 Dave Lambert died months ago. But every person who attends a peace rally at the courthouse or a march downtown against violence will never forget this hulking man with his handlebar mustache who died in his late 70s.

The other day I found myself thinking about Dave. I was reading the news stories of citizen marches and rallies around the country, in big cities and small. Here in Fort Wayne, The Journal Gazette featured an above-the-fold front page photograph of marchers as they came across the Martin Luther King Jr. bridge downtown.

City Councilman Geoff Paddock and one of my favorite clergymen, the Rev. Bill McGill, appeared to lead the march.

What sparked such demonstrations, of course, were police killings of unarmed citizens, in Ferguson, Mo., Staten Island, N.Y., and Cleveland. But a big part of the anger was the failure of local judicial systems to hold these officers to account.

In the New York incident, an officer used a choke-hold on Eric Garner that was caught on a bystander’s camera. The officer doesn’t appear to release the hold even when Garner says, “I can’t breathe.” Yet NYPD forbids the use of the choke-hold. No wonder.

Most protests didn’t destroy property. The main exception we saw of protests in Ferguson. If there was a main theme nationwide it was stop police brutality. In Oakland and in other cities, marchers chanted, “Hands up, don’t shoot,” a reference to some eyewitness accounts of the Ferguson tragedy.

Marchers in Philadelphia chanted, “No justice, no Christmas.”

There were so many Berkeley protesters that they shut down Interstate 80.

Will the demonstrations make a difference in how police officers confront citizens? It’s not likely. Police departments are pretty conservative and resist change, as we’ve seen through the years here in Fort Wayne.

But we have witnessed reform. Recruits must not only submit to agility and other tests of physical and mental competence. It’s commonplace now for recruits to take psychological tests, which should screen out applicants with major mental health problems.

As salaries have increased, especially where unions represent officers, we’re seeing more applicants who hold college degrees. I believe that should give candidates a broader understanding of their communities.

At the least, the much publicized tragedies should prompt department-wide review of policies, from training to how to handle potentially violent confrontations with citizens. Officers have much to learn from these recent tragedies.

My old friend Dave led or joined demonstrations against the war in Iraq, in Afghanistan and, before that, the war in Vietnam. He understood that stopping a war where the federal government had committed thousands of personnel and billions of dollars in equipment was quite an undertaking. Yet he also understood that he and others here in our city were joined with thousands of others protesting a war.

I used to remind Dave that if he couldn’t stop a war he and other activists achieved something also important. They protect our constitutional right to peacefully assemble and petition the government for change. Let’s not forget that basic right.

Democracy occasionally takes a wrong turn. As long as citizens can freely take to the streets, we’ll eventually get it right. What a legacy that people like Dave leave the rest of us.