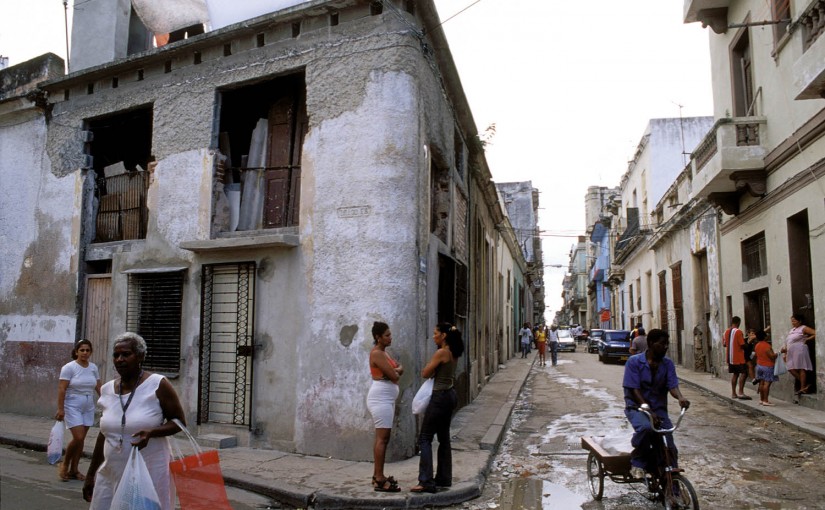 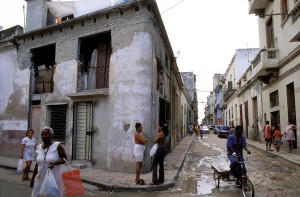 Ken was pretty upset when he discovered that somebody had broken into our van and stolen, among other items, the leather satchel that he had bought in Cuba.

Ken Brown was the longtime head of the Peace Studies program at Manchester College and a good friend. Over the winter break at the college he often took a few of his students on a foreign trip. I’m imagine when he got a group to Cuba it was through Mexico.

I’m sure if he were living today, he’d celebrate President Obama’s move to restore relations with the island nation, just 90 miles off our shore.

The year of the theft I had joined Ken and Manchester students to attend a huge peace conference at Riverside Church, whose minister then was the noted peace advocate, William Sloan Coffin, model for Rev. Sloan in the Doonesbury comic strip minister.

That year the issue at the New York conference was nuclear disarmament. What calls this to mind now was that years earlier, Soviet Chairman Kruschev attempted to introduce nuclear missiles to Cuba. I was in graduate school in Cincinnati at that time. I clearly recall President Kennedy breaking into the regular TV program to announce a “quarantine” of Cuba to prevent Soviet ships from entering Cuban waters and delivering the nuclear missiles.

I believe it was that same week I drove to a suburban school after class to receive my polio vaccine. Of course, the Cuban missile crisis dominated the news. Another thing that sticks in my mind was the news coverage of U.N. Ambassador Adlai Stevenson displaying aerial photographs of prepared missile sites in Cuba.

Stevenson then declared to the Soviet ambassador that he’d “wait until hell freezes over” for an explanation of the presence of those missile sites in Cuba. I’ve rarely seen such drama in all the years tuning into U.N. proceedings.

Americans, of course, had egg on their face too. The 1961 Bay of Pigs invasion, in planning under President Eisenhower, turned into a rout by Cuban forces. After the Kennedy assassination, pundits speculated that Castro had taken revenge. That was yet another way Cuba has broken into our consciousness. Never mind that the conspiracy buffs have always been unable to show proof.

Our many years of the trade embargo has helped devastate the Cuban economy, although central planning has played a major role in the island’s economic problems. And this, after Cuban Americans have been sending billions of dollars to families still in Cuba. I read that it was $3.5 billion last year.

I suppose American politicians’ reluctance to restore normal relations with Cuba has a lot to do with Florida politics. Thousands of Cuban refugees and their children live in Florida. Many are politically active. The older generation remains fervently anti-Castro. They vote accordingly in this crucial swing state.

But that generation is dying out. I understand a majority of younger Cuban-Americans have welcomed President Obama’s overture to Cuba. Meantime, throughout the hemisphere, Latin American countries, including the once anti-American Venezuela, have been celebrating the president’s move.

I still haven’t found my copy of

‘s Old Man and the Sea, published in 1952. When I taught English, I often assigned the novel. The Pulitzer committee cited the novel awarding Hemingway the prize in 1953 and, shortly later, the Nobel Prize. To me, the novel, set off the coast of Cuba, seems strangely relevant to me now.

In this brief yet remarkable story, we read of an old fisherman being pulled by a marlin he hooked for hours after days of failing to catch any fish. But old Santiago finally got his big catch to shore, the marlin destroyed by shark on the way in.

As Hemingway put it, “Defeated but not destroyed.” Which now could be said of the American-Cuban relationship. Obama’s opening is a good thing for both countries.