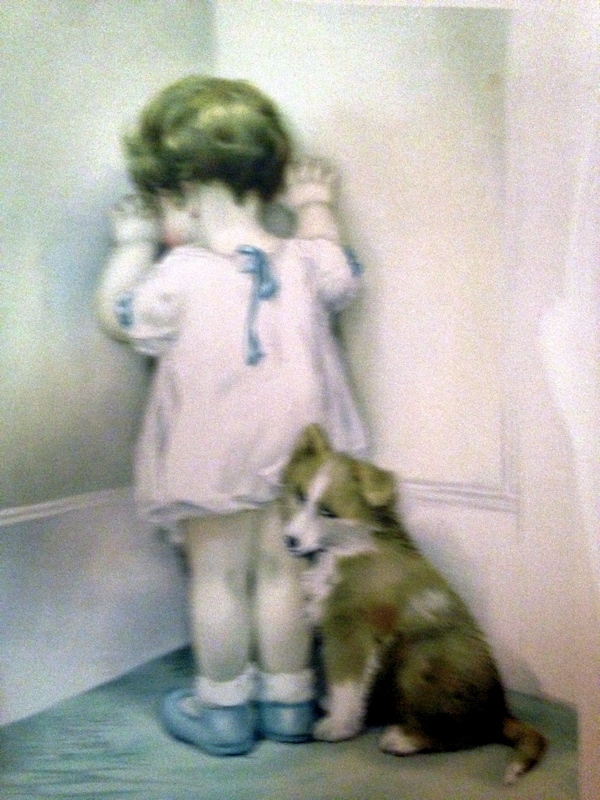 It’s no wonder I don’t remember when my family acquired the accompanying picture.

Mom’s handwritten note on the back says her boss in the claims department at Central Mutual Insurance Company in Van Wert, Ohio, gave it to her in 1930.

That was eight years before I was born.

Still, my memory is an early one of the picture of the child standing in the corner with the Collie puppy. It hung in our Defiance, Ohio, dining room, to the left of a hot-air register. In the winter I would take note of the picture. That was the spot in the corner where I stood to keep warm just after I stoked up the coal furnace on school mornings.

Today, we have the picture in the bathroom. The title says it all: “In disgrace.” You can’t miss the message. The child is being punished for some offense, albeit unknown.

I don’t recall Mom or Dad ever making me stand in the corner as punishment. Instead, Mom would have me sit in a chair until she told me I could get up. Dad, though infrequently, might spank me.

Once, after I called my grandfather a liar, Dad chased me nearly around the block before he caught me. When he did, he paddled me quite hard. He was really upset. It was right after Christmas. That year I was 12.

Quite often when the subject of punishment comes up I think about the picture of the child and the puppy in the corner.

The impulse to paddle a child depends on the culture. A Kurdish friend, now deceased, told me he would never hit a child. Instead, he might shun the child for a few days, that is just act as if they weren’t there.

When I was teaching high school in Dayton, Kentucky, a teacher might paddle a student without any criticism from the administration. A math teacher, who had played basketball for the University of Cincinnati, became notorious for his paddlings. He also was notorious for not having control of his classes.

The only time I paddled my own children was when I became frustrated and overwhelmed with anger. I never felt that I had accomplished anything constructive. Indeed, I left the child angry, too, and humiliated.

It wasn’t until I started writing editorials for The Journal Gazette that I started researching the question of corporal punishment. I could find no evidence that there is anything good about it.

I recall interviewing Indiana State’s Dr. Lawrence Beymer who had studied the issue for years. He was particularly interested in the practice at schools through the state. He saw nothing positive and much that was negative.

For one thing, paddling kids ruptures the relationship between teacher and student, nurturing resentment. Such punishment, further, often alienates the child from the learning that was supposed to be going on in the class. And the punishment keeps the teacher from developing constructive means of discipline.

I was once on the receiving end at the classroom. It was in Miss Zircle’s sixth grade class at Slocum Elementary in Defiance. Jim Barton, sitting next to me, was drawing pictures of the inside of a person’s head. Miss Zircle, a large, former Marine the story went, spotted Jim’s activity, picked up the paper, ripped it up and slapped him in the face, repeatedly.

I guess I laughed or smirked or made some facial expression that offended her because Miss Zircle turned to me and began slapping my face. I can’t say I ever liked this teacher before this incident, but I certainly liked her even less after she had slapped me. My face burned all the way home for lunch. I don’t think I told Mom or Dad about the punishment.

A few years before I retired from the paper, I had occasion to phone Dr. Beymer. For more than two decades I been writing editorials and calling for the state to outlaw corporal punishment in the schools. In surveys he had conducted, fortunately, he found that the practice was dying out throughout the state.

It’s not that educators who favored the paddlings had seen the light. No, parents in a couple of school districts had filed lawsuits over clearly excessive paddlings teachers had administered. One by one, school districts quietly dropped corporal punishment.

My wife’s first job as a school principal was in a suburban district. Day One, she announced, “There is no corporal punishment in this school.” And there wasn’t.

When she moved to head the city’s largest elementary, the district had already banned corporal punishment.

I think she proved you don’t have to paddle kids to have a smoothly run, orderly school. The same is true in the family. Lots of parents don’t paddle their children.

There are a variety of ways to punish a child. Paddling is one way. Having the child stand in the corner seems less harmful and more benign. But that can hurt, too. In the picture of the child in the corner, its back is turned and so you can’t see its expression. But you don’t have to see the child’s face. You know it’s a sad face, maybe even crying.

Please don’t tell me this is a good thing.