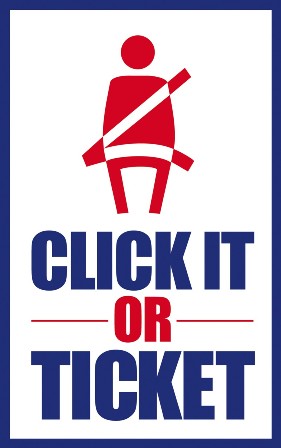 Bob had just pulled into his parking space behind me, next to the downtown library.

As I got out of my car, I noticed that he wasn’t unbuckling his seat belt. I was more than surprised. After all, Bob, then a state legislator and deputy county sheriff, should have been obeying the law and setting an example. Like an example for kids and editorial writers.

Moreover, Indiana is a primary enforcement state. That means police can stop you merely for a seat belt violation.

I greeted Bob and noted that he hadn’t been wearing his seat belt.
“Well, you see Larry, it cuts down on the time it takes to get out of the squad car.”

We’d known each other for years. So I didn’t hesitate to challenge him to a race to see who could get out of his car the fastest, he not wearing a seat belt or me wearing one.

The son-of-a-gun wouldn’t take my challenge. I took his refusal to compete was his tacit admission that he’d given me a pretty lame excuse for not buckling up.

Indiana State Police records show that during their 2015 campaign officers gave out nearly 3,000 tickets to drivers for not obeying the seat belt law.

That’s remarkable given that as states go, Indiana has a 94 percent compliance, according to the Centers for Disease Control and Prevention. We are one of the most law-abiding in the country.

We beat next-door Ohio’s 82 percent compliance rate, not to mention Rhode Island’s 78 percent. But those figures don’t tell the whole story. What matters most is the lives saved and injuries reduced by seat belt use.

The CDC says universal seat belt use would cut the death rate by half. Nationally, that represents about 20,000 lives a year saved. In my state of Indiana, where as many as 1,000 die each year total seat belt compliance could save hundred of lives.

In fact, the CDC notes, seat belt usage is the most effective way to reduce traffic fatalities. And what a savings in lives that would mean for the teen fatality rate: Only half had been wearing the seat belt. In the 1-54 age range, traffic accidents rates as the leading cause of death in the country.

For me buckling up was as basic as fixing coffee in the morning. I don’t recall that George Schlenker, my physics teacher at South Side High School, ever brought up the subject. Anyway, I didn’t need a lesson. So I figure that nobody else has an excuse not to buckle up.

You just imagine that you’re driving on just a passenger. Suddenly, something happens to make the car stop. It can be a change in the traffic light to red. It can be a sign you didn’t notice until you were right on top of it. Or it can be another car rear-ending or crashing into the side of the your car.

No seat belt? Guess what? The car you’re in stops. You don’t. You keep going. Your body slams into the dash or in a major crash, you’re thrown into the dashboard or through the windshield. I’m almost embarrassed to point this out. The physics here seem so obvious.

It didn’t occur to me then not to buckle up.

I recall thinking, “Boy, the seat belts are going to save a lot of lives.” I was right. They still do.

Even if you don’t worry about getting into a accident, the Indiana State Police can give you a heck of a good reason to buckle up. You won’t get stopped for non-compliance. You won’t get fined a few hundred dollars. You won’t have to pay court costs.

That, I’d say, is a pretty good deal. Plus, you probably get to keep your life.