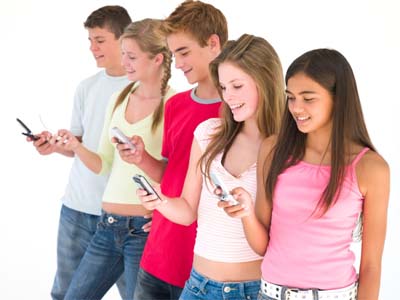 A few years ago, my wife Toni and I were walking on a side street somewhere in New York City. I don’t recall our destination or what conference we might have been attending. Maybe it was just a trip to the city to shop and catch a Broadway play or two.

This I do remember. Ahead of us was a group of young people – five or six, sort of bunched together. I took them for friends, good friends. They were all talking.

Not to each other. They were all talking on their cell phones.

Our walk was just a few years ago. I wondered then and I often wonder these days what the cell phone technology has done to social relations.

Today, on my walk in Foster Park, my friend Bart and I were wondering about the same thing. I have figured out that calling or texting a message to my son or daughter is a good way of making a connection.

The same holds true connecting with a granddaughter.

You might assume that young people spend most of their day on their cell phone. But the research shows 90 percent of young adults make or receive no more than 10 calls a day.

But differences exist in how younger people use the cell phone.  They’re more apt to “text” a boy or girl friend to break up. The young person is more likely to be annoyed with you if you don’t answer promptly.

(That may partly explain why I get so few personal messages.)

At the same, cell phones seem to enhance relationships – at least for those younger people who regularly use the devices.

I can see both pros and cons. On the pros side, the cell phone can be a life saver if you see a person crumpling over, with his or her hands to their chest.

If you’re expected at 6 p.m. at a friend’s for dinner, you can pull off the road and call or text to say you’re running late. Which reminds me to argue for not making calls or texting while you’re driving.

I’m sure for lots of people, the cell phones can help them stay connected with others. So what if they’re not discussing philosophy or higher math. Calls on land-line phones don’t usually engage in such intellectual exercises, either.

On the negative side, a driver on his or her cell phone has sometimes caused a serious accident. I’m sure, too, that frequent calls or texts have damaged relationships.

The frequent messages I get on the laptop and the cell phone almost always are inviting me to subscribe to or buy something. I know you can always say you don’t want to be contacted again.

I guess I’m just too lazy to take the trouble to request to be put on a don’t call list. So the messages keep coming.

Of course, as with the young group we walked behind in New York, talking or texting while with friends can be off-putting.

One time at a writer’s conference in Charleston, I joined a younger group to go out for dinner. But it was impossible to carry on a conversation. Several friends were on their cell phones.

I’m pretty sure nobody thought he or she was being rude. I did.

I found research that suggests cell phones can enhance friendships.

For my part, I’m at peace with how the devices have changed and perhaps enhanced relationships and helped connect us to one another. Meantime I expect the manners of texting and talking on the phones will continue to evolve.

Perhaps one of these days I’ll take the trouble to inform advertisers to please take me off their list of people to contact.