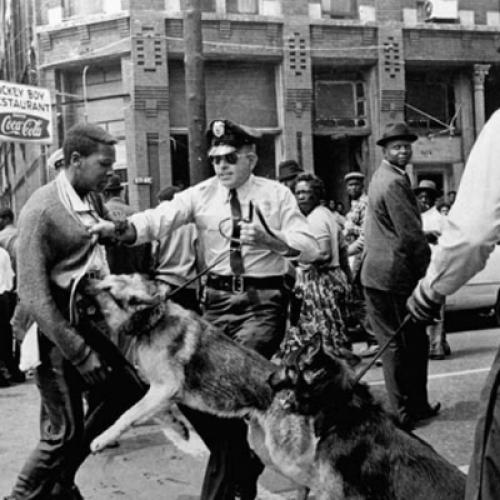 I suppose if there’s one theme to my quarter century writing editorials, it would be civil rights.

During the Rev. Shelly’s sermon Sunday, she even mentioned me by name and my role in advocating for school desegregation.

So in the afternoon, following the annual congregational meeting, wife Toni, daughter Robyn and I joined hundreds of people, black and white, to walk to commemorate the 50th anniversary of the civil rights march in Selma, Alabama.

The film, “Selma” recently depicted what happened when demonstrators attempted to cross the Edmund Pettus Bridge. Rather than protecting these hundreds of the peaceful marchers, police confronted them with tear gas and billy clubs. Scores fled bleeding, some badly injured in what historians consider one of the darkest moments in our nation’s history.

Now, so many years later, we marched to remember. The crowd gathered at North Side High School on a sunny day with temperatures in the low 40s. Police and emergency vehicles guarded our path along the St. Marys River, to the Martin Luther King Jr. bridge. As we walked, I read the slogans chiseled along the bridge’s sidewalk such familiar slogans: “Peace with justice,” “equality for all.”

Unfolding along the bridge echoes the great sermons of the past for civil rights. But I can’t linger. The crowd carries us onward. A mile or so into the march, we reach the eastern side of Fort Wayne’s downtown. Moments it seems later, we’re on Main Street and Freimann Square. We assemble around bleachers. The crowd grows quiet as we await words from the speakers.

One of my favorite preachers, the Rev. Bill McGill, presides. First up is Jackie Joyner-Kersee, a black Olympian and Fort Wayne native. We cheer her and her brief remarks. Mayor Tom Henry welcomes the crowd. Finally, Rev. McGill reads the very words of Dr. King’s address in Montgomery, Alabama. I’m reminded once more of King’s eloquence. What league, Lincoln, FDR and King!

After visiting with friends, we walk to Hall’s Gashouse restaurant for an early dinner. I’m reminded of how much has changed in our country since Bloody Sunday 50 years ago. In every state of the South, you can find black officials. Under President Johnson’s Voting Rights Act, black and other minority citizens can and do vote, if not in the numbers I’d hoped to see.

I imagine that many citizens of Selma must have taken note this past weekend that the celebrity who came to their city to commemorate Bloody Sunday was a black man, President Barak Obama.

No doubt lots of people at such marches noted that the country still has a long way to go before we say we practice racial justice. They can readily cite recent incidents in Ferguson, Missouri, Cleveland, Ohio, and New York City. These recent tragedies expose our many shortcomings.

Yet like Dr. King, we’ve seen the Promised Land. So we lock arms. So we march. So we remember. So we pledge ourselves anew. So we go home to work for justice. Yes, this is a different America.