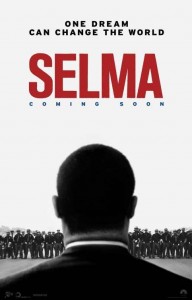 To be honest, I wasn’t sure I wanted to see the film. Did I really want to be reminded of the awful things that happened during the 1960s? Did I want to relive the murder of Unitarian minister, The Rev. James Reeb? Or the murder of Viola Liuzzo, a peace activist, I believe, from Detroit.

Then, how could the British actor David Oyelowo possibly create a credible Martin Luther King Jr.?

I’m glad we took in the film. We caught the early afternoon showing. As uncomfortable as it sometimes made me feel, “Selma” nicely summed up what the story was about. It captured the marchers’ resolute courage. It portrayed the ugliness of the white citizens. I guess I didn’t need to be reminded of police officials such as Jim Clark and “Bull” Conner. But they were part of the story, too.

Such men embodied the deep hatred that I’ve always associated with racism and slavery’s ugly legacy.

I have no earthly reason to associate that small Alabama city with any important national event other than to summon up one of the seminal events of the civil rights era, indeed of American history

It was the mid-1960s. I was a graduate student in Cincinnati. During the day I either sat in some graduate seminar or was working on my divinity thesis. Evenings found me typing freight bills at Duff Truck Lines. Nobody I associated with in those days followed the civil rights movement more closely.

Even before he was awarded the Nobel Peace Prize, I was a huge fan of Dr. King. I found Oyelowo’s portrayal solid, credible. This King was reticent, not a bit boastful. Rather, given what he faced, he was full of self-doubt. Here also was the King I recall. Yes, he was a simple man. But wasn’t he eloquent in the pulpit! In private, the film shows a reflective man, not given to hasty reactions. This King made me think he had been given a holy mission. It was to win the right of black citizens in the South to vote.

For me, the actor’s cadence and reserved demeanor resonated. I could hear easily the impassioned voice of Dr. King 50 years ago.

The times depicted in “Selma” were such brutal times. You might find it hard to believe that somebody would plant a bomb at a church. That bomb killed four black girls. We saw them in the film all dressed up, chattering away, heading for Sunday School class, then the blast. But added to this crime, it was the televised beatings of marchers headed from Selma to Montgomery that stirred the national conscience.

“Selma” reminds us of key historical players throughout the drama. That included some of my favorites, such as James Farmer, Bayard Rustin, James Bevel, Hosea Williams, Andrew Young and John Lewis, later the eloquent congressman. Malcolm X even makes an appearance. For years I felt I personally knew them all.

Much has been written about how the film portrays Lyndon Johnson. I thought the actor Tom Wilkinson did a nice job of capturing LBJ’s blunt, even profane talk and overpowering personality. In the Oval Office, the actor playing Gov. George Wallace seemed to grow smaller as the talk with the president went on.

LBJ former aides and historians have objected that the film fails to credit the president with taking more of a lead on the Voting Rights bill. Here, we see Dr. King applying the pressure and winning LBJ’s acquiescence.

Director Ava DuVenay objects that she and her colleagues didn’t set about to recreate a history of this momentous era. That’s a fair defense. “Selma” isn’t a documentary. Yet I fail to see how getting LBJ’s role historically more accurate would have diminished the drama.

What is indisputably true about the film is how it tells the story of a defining moment in our history. The discrimination was real. The racism was real. The brutality was real. Also real was the courage of the marchers from Selma to Montgomery. And also real was the central role in this historic drama of an eloquent young preacher named Martin Luther King, Jr.