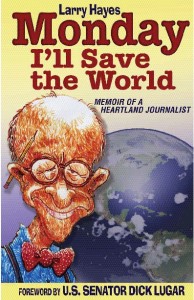 No one would call U.S. Senator Dick Lugar a liberal, but this Republican Senator has written the Foreword to “Monday I’ll Save the World,” a memoir by liberal journalist Larry Hayes. In the Foreword, Lugar writes, “Larry Hayes not only had views, he had missions. By doggedly pursuing them, he changed lives and made extraordinary contributions to Indiana. Larry’s own story and the others he tells are an inspiration for all seeking to find their place and work in life.”
As the editorial page editor and columnist for The Journal Gazette in Fort Wayne, Indiana, and a self-professed liberal, Hayes had the ability to make friends and enlist supporters from all sides of the political and social spectrum.

Hayes never took the role of an impartial journalist, sitting on the sidelines. He got involved in the pressing issues of his community, state, and nation, and he persuaded others to work with him and make a difference.

Nowhere was that more evident than in his efforts to bring about full integration of the schools in Fort Wayne. When Hayes writes about that, he says, “I saw a powerful connection between our neglect of black children and the city’s well-being. The refusal to desegregate the elementary schools, I argued in one editorial, was a stain on the city’s reputation. In my zeal, I wasn’t always fair or even nice. I offended some people that I didn’t need to, although I never explicitly accused anybody of racism.” Hayes took his activism from the editorial page into the community and involved Ian Rolland, the CEO of Lincoln National Corporation, in the struggle, as well as hundreds of other people.

“Monday I’ll Save the World” gives the full story of the integration of Fort Wayne’s schools and tells how ordinary people and civic leaders can make a difference.

The book is a memoir but it is also a “how to” book for people who want to make a difference in their communities. Hayes describes with passion and detail how a small group of people can make an enormous difference in the quality of life.

One thought on “Monday I’ll Save the World”

This site uses Akismet to reduce spam. Learn how your comment data is processed.