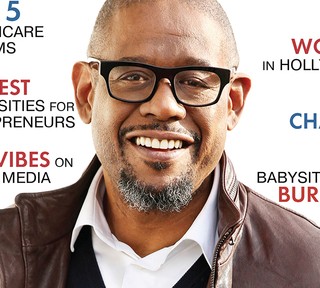 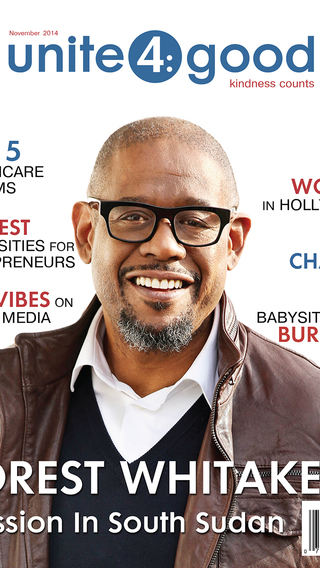 I know there are lots of publications that promote worthy causes. Many church and other religious magazines feature people who are doing well by doing good. Every issue it seems of our Unitarian Universalist “UUWorld” spotlights such folk and champions such causes as the homeless, safe drinking water in faraway countries and prisoners of conscience.

Yes, there are lots of publications out there. But I discovered a new magazine at Barnes & Noble this week that surely must rate as one of the slickest and most compelling publications promoting good causes. It’s named “Unite 4: Good.”

I did a double-take when I first noticed the magazine. I wondered why pick November for the first issue, although I suppose the timing has something to do with the busy holiday shopping season coming up when book stores fill with customers.

An almost life-size photography of actor Forest Whitaker appears on the cover. Inside the magazine, Whitaker is shown with children in South Sudan. That’s the newly created country following the Sudan’s civil war. The inspiring article that accompanies the photographs is one of hope for this impoverished part of the world.

In his introductory essay, founder Anthony Melikhov writes about his hopes for new publication. Here’s a guy who wants to change the world. I’m all for him!

Indeed, the magazine is an ambitious undertaking. Inside this inaugural issue, you’ll find stories with compelling photographs of animals recently removed from the Endangered Species List. There’s a rating of the world’s top health care systems. The United Kingdom rates Number One. You guessed it. The United States didn’t make the list. Obviously there’s still work on this issue for Americans to do. President Obama’s plan isn’t the last word.

Unite 4: good offers practical ideas for all kinds of people. On this page you’ll see ways to improve your relationships with family members. In another section, you’ll find college programs that prepare you for jobs where you can help make it a better world. You’ll read about ways to try out your talents. Then another story features “Moth” bars. I hadnt heard of them. They’re in 14 cities. These cozy looking bars invite customers to entertain people with a five-minute story. Now that’s cool.

Founder Melikhov believes such articles can inspire readers to give back to their communities. His argument is that getting ahead at others’ expense no longer works. Rather, he and his stable of writers and photographers are committed to the idea that “we’re all in this together.” So here it is. It’s a publication that promotes a happier world. About time for the Bible to have some competition.

Even when you close the magazine and start for the desk to pay or to return the publication to the shelf, the visuals on the back cover challenge you to good words. You glance at the back and there they are, logos for 13 good causes, affiliates of the magazine. These include unicef, DO something.org, Feeding American, Boys and Girls Clubs and Points of Light.

I’m taken back more than 50 years to a small religious college in Michigan. It’s the first chapel service of the semester. I’m a freshman, sitting about halfway back from the piano and pulpit. The speaker for this inaugural service is evangelist Jack Anderson of South Carolina. He’s in the area to conduct evangelistic meetings.

“Students,” he begins, “There are a lot of good people in the world.”

It’s one of the few lines of any chapel speaker in all my eight years in religious colleges that I remember. Maybe I remember because Anderson’s words were about the best. I have no idea what else he said.

These days, I’m hardly alone wondering why there’s so much meanness and violence, so much hatred and cruelty. I’m at a loss to understand people responsible for kidnappings of young girls in Africa, for beheadings in the Mideast and for pointless executions in otherwise quiet neighborhoods in American cities. That’s not the whole story. Not by a long shot.

The facts are worth repeating. Horrible things often dominate the news because they are the exceptions. You have to look for the evangelist’s good people in the profiles of the feature sections. Or, most likely, you can look next door. In all likelihood, folks there are helping make the world a better place.

If you’d like to jump in, check out this new magazine, November issue. It’s called Unite 4: good.