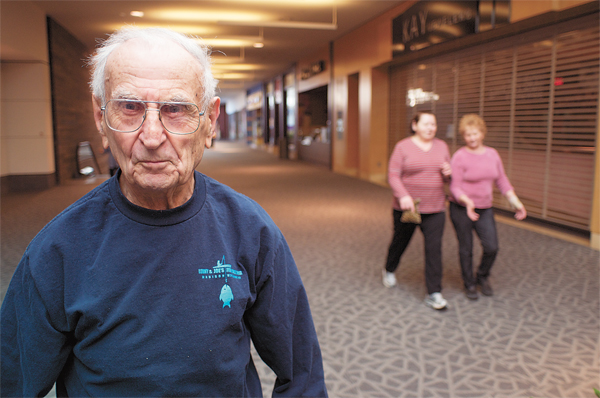 Lately, I’ve been remembering a film that featured dead people, all dressed in white gowns, walking single-file around and around, without expression, with no particular end.

I think actor Albert Brooks was a main character. Beyond that I have no other memory of the film. Well, it probably was featured at Cinema Center, a downtown theater that often features art films.

What brought this to mind has been my morning hour-long walk at Glenbrook Shopping Center, on the city’s north side. The only reason I’m doing this walk at the shopping mall is that it’s been too cold, nearly zero in the morning lately and too icy to comfortably jog in nearby Foster Park.

I confess to being a bit grouchy to be forced to walk at this mall. To be sure, jogging in the park takes me past the same trees, the same tees and greens of Foster Park golf course, the same clubhouse, the same tennis courts every day. But I’m usually following all this routine as if for the first time. I’m celebrating as I greet familiar faces, which include the “guys,” older, black men who greet me by first name.

Walking at the mall is a different story. Though I recognize regular walkers, I rarely see anybody I know. I have nobody to visit with. The scene only changes as the Christmas shopping season approaches. Then, a fast walker, I’m dodging browsers and people pushing small children in pretend fire engines.

By the third time around the mall, the boredom of passing the same clothing stores, gift shops and fast-foods at the food court starts to get to me. Yes, I’m grouchy. But the greater challenge comes as I see one person after another who appears much younger than I and yet obviously much overweight.

Passing such out-of-shape, out-of-breath walkers confronts me with one of the most important lessons of one’s life. You can find the lesson in the Bible. To be specific, you can find it in Matthew 7, verse 1. Most of us have heard the lesson: “Judge not that you be not judged.” That’s from Jesus’ Sermon on the Mount.

I certainly came by my temptation to judge naturally. Mom and Dad were among the most judgmental parents in northwest Ohio. It’s a variation on the song from “South Pacific,” which says, “You have to be carefully taught to hate.” Likewise, you can be carefully taught to judge. So, following Mom and Dad’s example, I tend to find fault. I tend to fix on other people’s faults and shortcomings.

Meantime, I can smile, say hello and wish fellow walkers a great day. In other words, I can remind myself of how my judging just puts me in a grouchy mood. There’s nothing positive or good about it. I then can feel liberated to celebrate my fellow citizens. Here they are, caring enough about themselves and their families to get out of the house and exercise.

Here I am in my late seventies. To be sure, I want to be healthy. I want to be in good shape and able to jog, even if at a snail’s pace. But I sure don’t want to spend my last years on this earth a crabby old man nobody wants to be around and who contributes nothing constructive to the world and to his fellow human beings.

Today’s forecast is for near zero temperatures for the next day or so. I imagine the park still won’t be clear of icy spots. So no jogging for me tomorrow and maybe for the next few days. So after I’ve done a few push-ups, I’ll head for the shopping mall and join the other walkers. I’ll leave the judging to the other geezers.