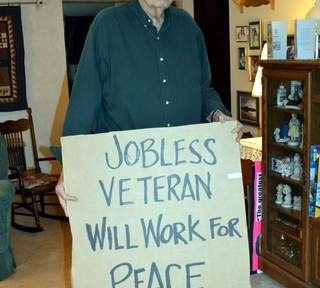 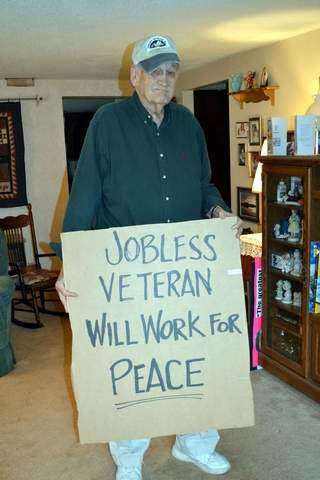 Dave Lambert died the other day at the age of 79. But the news story about Dave on the front page of The Journal Gazette Metro section didn’t tell the half of it. First, he was a better than passable amateur actor in local theater. Actually, he was quite good. He was a vocal advocate for kids. Mostly, I suppose, he’ll be remembered as a peace activist, probably the best-known in the city.

We were friends for at least 40 years. A tall, handsome man, his booming voice meant that he was going to be listened to. Which was good. He had a lot to say, in particular about America’s wars.

I never heard how he became a peace activist. He was a Korean War veteran. That doesn’t tell you much, however. Lots of veterans joined the peace movement in the 1960s. That includes the U.S. Secretary of State John Kerry.

In recent years, you could hear Dave speaking about any Saturday to a gathering at the courthouse green downtown, protesting the U.S. invasions of Iraq and Afghanistan. I can tell you he didn’t like George Bush who launched those wars. He was no fan of President Obama either, his distrust going back to Obama’s early years in office. He was especially critical of Obama’s approval of drone strikes that have killed so many innocent civilians, including children.

I told him even if he weren’t able to stop any wars he accomplished something very important. He helped insure his and other demonstrators their right to protest in a public forum.

Dave produced peace action shows for public access TV. At the Unitarian Universalist meeting house, which he attended off and on for years, he showed anti-war films weekend evenings.

During UU Sunday services, you might see Dave sitting in the front row, awaiting his turn to light a candle and say a few words on some current peace topic.

For years, Dave maintained his visibility on the Journal’s editorial page. As editor of that page, I had the final word on the letters. I chuckle to recall how he frequently criticized me for editing his letters so that they would be watered down, losing their punch. I never was able to convince him that any editing was to make room for other letters. Our disagreements – if lively – were always good natured.

But Dave believed the news media, including my newspaper, were biased in favor of government and big business. Of course, I challenged him. We often had these debates after the church service or in the cereal aisle at Kroger’s or in an adult forum class I might be leading. Again, my arguments left him shaking his head in disbelief.

Yet we remained on good terms over the years. When I saw him after the church service on a recent Sunday, I thought his greeting was particularly warm, heartfelt. No wonder he had such a reputation for getting along with all kinds, despite his formidable personality and strong beliefs. He genuinely liked people.

I don’t believe there’s another peace activist in Fort Wayne who can step into the role that Dave played here for so many years. He stayed with the cause of peace until the very end. I have been proud to call him a friend.